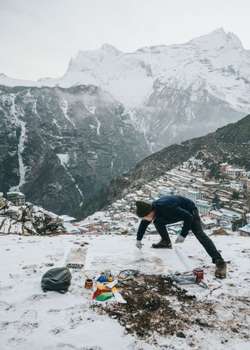 See inside the studio
Peter Kettle has recently been voted in as a Fellow for the Royal Society of Arts (FRSA).

Peter Kettle’s work has the surfaces of well-worn exterior walls, buffeted and corroded with the appearance of having withstood the effects of time and weather – a technique that gives his work an enlivening combination of stoicism and nostalgia.

"Peter creates paintings by immersing himself in the landscape. He builds his work around planned journeys around his native Wales, and more recently, exploring the remotest regions of Patagonia and a challenging expedition to Everest Basecamp. Peter records colour, texture and weather elements in enpleinair paintings in sketches and on large canvas. Back in his studio he will work these studies up into ambitiously scaled, expressive landscape paintings, using paint and other media poured, rubbed and splashed onto the canvas. Having worked exclusively in oils, his technique has broadened to incorporate the use of French Chalk and Shellac with oil giving his paintings the impression of well-worn exterior walls, buffeted and corroded over time. The effect is a characterful, well weathered surface, stony and granular that is at the same time luminous with dramatic light.

In April 2019, Peter Kettle collected litter throughout a 14 day climb to Basecamp, Everest, to be recycled into enpleinair Oil and Collage paintings. With a large canvas roll strapped to his back, the aim of the project was to evocatively present and honour the landscape artistically, but also draw attention to concerns regarding waste management in the Himalayas. Kettle has since gathered the smaller field paintings and sketches to explore an abstract expressionist response to his experience. Large scale canvas work fill the collection with towering snow-capped peaks, winding valleys and vistas over gilded Stupa’s (buddhist prayer statue). The collection brings together a documentary, and an expression, of an expedition of mettle and art to the worlds tallest cathedral - Mt. Everest.

In 2014 he was elected as a Fellow of the Royal Society of Arts (FRSA) and the Royal Cambrian Academy (RCA) He was identified as 'One to Watch' by Moneyweek Magazine in the same year and in The Guardian in 2017. Peter Kettle is certainly an exciting young talent on the rise in contemporary landscape painting. He has made works of the Port Talbot Steelworks, The Taff Railway Trial to the Brecon Beacons (marking the coal transport route and source of the River Taff) and North Wales Slate Industry.

In 2018, Peter turned his attention to Patagonia, and spent 4 weeks retracing the steps of the Welsh Settlers Voyage. He also payed homage to Kyffin Williams trip to Trevelin in Patagonia 50 years ago to this year. Peter is growing into an international and investable artist, with pieces held in public and private collections worldwide. "

Islands in the Bristol Channel...

Bending Light Atop of St. John...

Bull Horns Dig into the Mornin...

The Remains of Snow

Looking Across to Porthcawl

Merthyr Mawr - Before the dune...

Looking Out from Dunraven

River Taff, Through the Trees ...

Vale of Glamorgan, Fields Over...