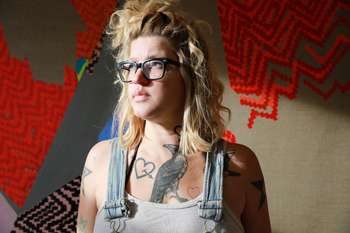 Lindsay was selected for a documentary called ‘Looking for Picasso’. 12 artist from around the world were chosen. An American production, (she is episode 2).
The French critic, Albert Aurier once said that truthful art must never be a direct representation but rather the aim should be to “express ideas, by translating them into a special language”. Lindsay Mapes does just this by transforming, distorting and transcending her experiences into an alphabet of expression. Form, line and colour take precedence in each work and together shape an innate and instinctive pattern. The piece “seeing double” uses transparent layers on re-purposed wooden frames, infused with colourful pattern, each layer adds new depth. Moreover, the wooden frame is made from previous paintings and evoke a sense of time – these past paintings live new lives and are the evidence of, as Mapes expresses, “the process of creation”. The image therefore, takes on sculptural dimensions and Mapes’ interests in colour and creating image through abstracted methods, delve into the realms of pictorial language with insightful dexterity.

Originally from the USA, I studied Painting at San Francisco Art Institute (1996–2000) and Studio Arts Centre International, Florence (2006–07). I then went on to study for my MFA in Painting at the Slade School of Fine Art, UCL, London (2008–10). Since then I have been based in London and Italy.

My art explores themes of erasure, obfuscation, obstruction, and secrecy in a series of boldly-coloured paintings and drawings. Colour and pattern play a significant role in my paintings. The relationship between colour and the feelings that certain colours and colour combinations evoke is always at the forefront of her work. Through an extended editing process in which layers of form, line, and colour are built up, scraped away, revealed, and hidden, I tend to draw upon the concept of the pentimento (from the Italian pentirsi, to repent), which, in painting, refers to an alteration evidenced by traces of the artist’s previous mark-marking, revealing the changes made during the painting process. In this way, I examine how a thought process can be realized in paint and the visual language.

Let's meet in the middle

Story of my life

When two become one