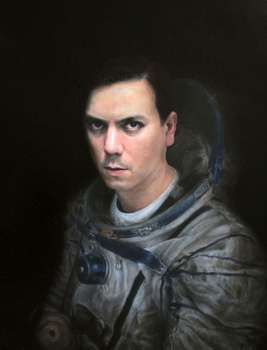 David OMs skyscapes and telescopes communicate a huge sense of scale. Observatories ogle upwards like giant eyeballs, and miniature figurines gaze outwards through trompe d'oiel windows - created by the frame that stretches the canvas. Showing us the back of the canvas in this way suggests that the image lies somewhere in the infinite yonder.

There is a sense of dignified Zen-like detachment to much of David OM's work, many of his compositions function through minimalism and juxtaposition clarified through studious and critical practice. At the core of his work oscillates a pure sense of wonder alternating with a cold nihilism. His art often interacts with space science and astronomy whilst incorporating a metaphysical subtext that enables subject matter to assume new (often existential) symbolic meanings.

Astrophysics and figurine art are both subjects that capture the public imagination at present. Brian Cox meets London street artist Slinkachu with these playful reflections on the universe.

Essentially I am drawn to the power of vastness and the context of the wider picture; the compelling journey from that which is constricted within to the cusp of the infinite. An existential undertow may be detected from ruminations on the metaphysical aspects of time and space. I seek to instil a pure sense of wonder in my work that will guide the viewer to tap into the awe of the sublime and transport the individual. I am particularly fond of a David Lynch quote postulating that the restrictions of the film making process do not apply to the field of painting and that indeed ‘painting is infinite’.