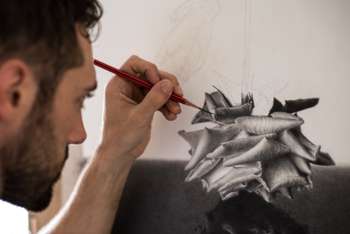 See artwork in-situ
James O’Connell uses the passage of time as a subject matter for his work. The repetitive mixing of colour, loading of the brush and application of paint is a response to today’s acceleration of culture and images and a way to dislodge visual conventions, thus demanding greater space, time and attention. “I often think about Cezanne’s comment, ‘one must see nature as no one has seen it before’, in response to post-industrialism and the changes in our visual experiences, especially now in the digital age.” The intention is to create an object that is both immersive and romantic in terms of contemporary escapism.

Employing illusions, perspective and symbolism, James O’Connell’s intention is to create an object that does more than represent reality. “I seek paintings that have the same effect as dust on a television screen – for the viewer to become immersed in the show they are watching, only to become aware of dirt on the screen, and with that, gain awareness of the screen itself, of reality, of illusion.”

The subject matter and application of paint is expansive and eclectic. From a single thick coat of paint applied like icing on a cake, to multiple translucent, glass-like layers establishing a sense of depth. Each painting seeks a specific response from the viewer, whether it be stimulating appetite, or prompting movement to reveal images hidden by perspective.

A Rose Below the Windowsill

Prelude to the Best and the Wo...