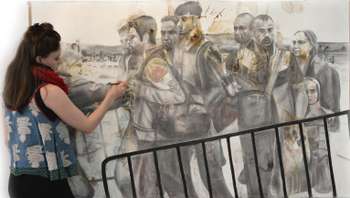 See inside the studio
The communication between viewer and artwork, or self and other, are vast in the case of Samantha Wilson’s work. Our attention is immediately caught in the punctuating forms that loom over us with an engaging presence. Large scale figures and bodily forms rendered in charcoal and ink stare out in uncompromising and stark confrontation. Wilson chooses pastel shades and ominous pinks against the shadowy, smoky contrast of charcoal to draw beautiful yet provocative reflections of individual characters. The often withdrawn expressions and vacant faces lend a mysterious and somewhat isolated mask to each figure, begging questions of identity and the societal discord of otherness. Each figure is cloaked in darkened shapes contrasted against softened edges, which lure unsettling feelings. This, in turn, exposes the diverse interpretations and arousing subjectivity obtainable through each piece.

My work contemplates the human spirit. Inspired by philosophy, anthropology and spirituality; it asks the question; what does it feel like to be human, alone and together? I desire to create a visual language that explores the visible and invisible spaces in the shadows of human experience and relationships. In this view, ambiguity often plays a role in the formation of works. My intention is to use drawing to explore relationships in both the physical and ephemeral realms amidst our modern-day society. The work is influenced by current political problems including societal conflicts, relational disconnection in everyday life and key figures that play a role in affecting these issues. My long-term ambition is to create a dialogue in art that conveys us as a collective public, offering visceral and contextual knowledge on how we can maintain togetherness, amidst separateness in modern times.

Serena and the Monkey

Lovers in All Circumstance

Hanging Dreams Out to Dry