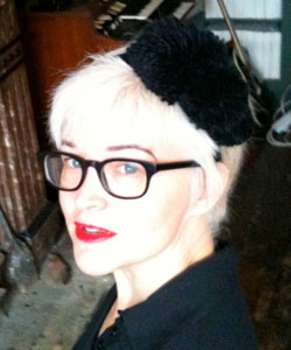 See artwork in-situ
See inside the studio
Avidly collected by patrons such as Sir Paul Smith, Keren Luchtenstein's still lives see the observation of objects with almost irrational reverence. Luchtenstein’s attentive and nostalgic paintings playfully investigate the resonance of objects and the powers we give them to protect us.

Keren Luchtenstein makes illusionistic oil paintings portraying items which appear to occupy the viewer’s space. As a child Keren remembers the sensory experience of examining objects with a heightened obsessive focus. Through her paintings she aims to communicate the pleasure thus derived.

This connection with childhood feelings informs the subject-matter - the yearning for beautiful shoes and ornaments, the emotional attachment to well-used utility items and to inherited objects. Much of Keren's work relates to fashion and textiles - clothes and interiors being an abiding delight to her.

The paintings reflect her personality- at the same time quiet and controlled but passionate and emotional. Despite the skill-based approach to the work, the paintings aren’t about virtuoso technique, they are about the feelings evoked by contemplation of the objects portrayed.

Keren studied textile design at art school in the 1970’s, gaining an MA at the RCA in 1980 before pursuing a career in illustration. She has been painting full – time for several years.

I paint belongings. They include toys, jewellery, shoes and ornaments. These treasured possessions are painted as portraits, imbuing them with the importance I feel they deserve. The paintings invite the viewer to imagine stories about the objects and the memories and emotions they trigger. Lost possessions can cause a yearning out of all proportion to their monetary value. my refugee father lost everything, not once but twice. In the end, his belongings existed only in his memory. In my work, I try to recapture the hidden past of lost possesions. People who have commissioned me to paint their precious objects are often overcome with emotion when they see the finished work.