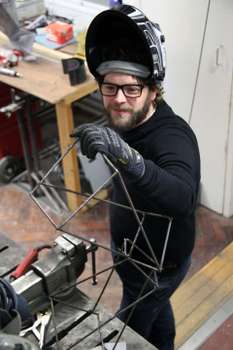 My work is influenced by West coast American “Googie” architecture. The origin of Googie derives from a John Lautner designed coffee shop built in West Hollywood. Originally appearing in commercial buildings such as restaurants, coffee shops, motels, gas stations and bowling alleys in the 50's and 60's - the distinct styling included curved lines, odd abstract cut–outs, up–swept roofs and boomerang shapes. My sculptures are colourful and eye catching, made with the intention of catching people’s attention and drawing them closer.

I am from North Wales - I studied sculpture at Bretton Hall College – (University of Leeds) graduating in 2002, and then subsequently went on to complete a Masters in Design from Leeds Metropolitan in 2004. I have been elected as a member of the Royal Society of British Sculptors, and have exhibited across the world in galleries in London, Liverpool (Tate Gallery), Leeds, Cardiff, London, Europe and America. Internationally I have had work on exhibition in Europe, Los Angeles and Palm Springs, and my work can be seen in private collections across Europe and America and Australia. my work has also been on permanent display at Michael O’hares Michelin stared restaurant “The Man Behind The Curtain” in Leeds.