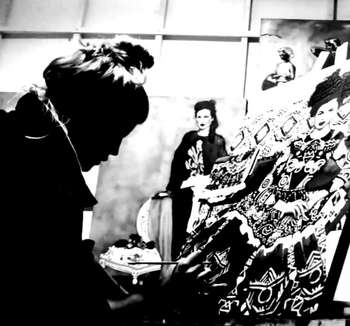 Paris Blanche Magenta Foot's paintings retain a unique and distinctive visual language, which is immediately recognizable and absorbing. Foot’s mixed media pieces are also brilliant; tactile and engaging - and quite touching. The faces of the pieces - caught somewhere between figuration, puppetry and debris – are reminiscent of the luminous faces of the films of the silent era, despite being based on personal source material culled and elevated from family photographs. Stylistically incongruent, the expressions of the figures seem sweetly unaware of what the rest of them are made up of.

“The transition between childhood and adulthood is so gradual it slips by unnoticed. All at once we have lost the spontaneous vivacity of a child, and have instead become a practical, analytical adult. I cast my mind back to the days of lying on my belly in the grass; encircled by a moat of brightly coloured paint pots, and sheets and sheets of fresh white paper. There was no hint of anticipation that I may not succeed in creating beautiful pieces of art – just a rising excitement that anything could happen. And for the next three hours worlds were shaped, and stories told, in colours bearing no resemblance to reality, and yet in that moment my inner and outer worlds were indistinguishable. In nineteen years this approach to creating has not altered so very much.

Inspiration is a hard thing to pinpoint or categorise - as it can materialise from so many different sources- though very often it will be triggered by a beautifully vivid colour, on a passing umbrella for instance, and this will then become central to the painting I am working on. More recently I have discovered how fantastic it can be to work on a number of paintings alongside one another; for even if the subject matter of each has no link whatsoever, it becomes almost certain that a visual narrative will develop between them. And the stories that other people conjure up can be even more absorbing than my own.”

You, Me and Our Tree

There is a mind under this hat...

Where Do Rainbows Come From?

I Carry You With Me