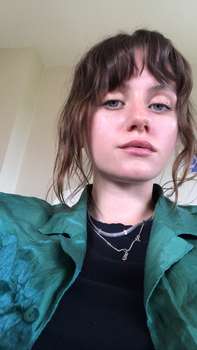 McFadden’s work comes with a very specific ambition. Inspired by growing up in Derry she wants her work to be a way in to talk about the conflict in Northern Ireland and the ‘footprints’ it has left on day to day life. Therefore, her work is often very sombre in tone, with muted colour palettes. The focus on the everyday is crucial to her. Centring the mundane helps demonstrate how the effect of the conflict is still felt in small, ordinary parts of life – for example how to her the windsocks either end of a bridge have come to represent suicide. She uses a mix of materials, including graphite, paints and sawdust which give her work a raw quality which only adds to the ‘dreary existential reality’ she wishes to portray. Thought provoking and striking, her work is an indirect reminder, not of the violence of the conflict but the effects on the people left behind.

My work is an indirect look at and an exploration of the effects of The Troubles on Derry City. In my practice, I make paintings that are less immediately concerned with the violence of the past, but instead, intend to reflect the environment of the city by depicting the mundane spaces the citizens inhabit and the silent objects we ritualistically interact with. The act painting of these unlikely subjects gives weight to their banal familiarity, which, in turn augments nuances of the dreary existential reality in which the North finds itself. These objects appear as the passive participants of a lingering trauma, as victims of the poisoned land, as quiet reflections of the bleak realities of our society. Through their readings, they become the yardstick by which we measure the deep-seated issues, such as sectarianism, suicide and division, that continue to define the narrative of the nation. In order to avoid making work that could appear to sensationalize such subjects, I tend to be more oblique in my responses to them. Taking cues from Northern Irish poets, such as Seamus Heaney and John Montague, I use layered emblem and metaphor to describe the post-conflict climate of the North. As well as this lending itself to a more accurate representation of the psychic landscape of the North, in its culture of silence and its own tendency toward coded symbolism, the paintings also allow the viewer a less confrontational way into these difficult and charged subjects.

Tales from Beyond the Pale