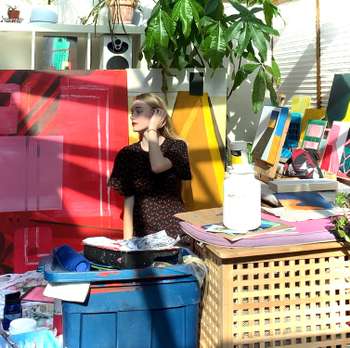 For the last four years, my work has largely been exploring the contrast between the interior and the exterior, the relationship between inside and outside, and most recently the ‘liminal space’ that exists there. The word ‘liminality' is derived from the Latin word 'limen,' meaning 'threshold,' and closely associated with the word ‘limes’ meaning ‘limit.’ Unlike a limit, a threshold is not an end-point but a mid-point that allows for fluid crossing of, or a wavering between two worlds.

I’m often drawn to the paradoxical nature of the window as a boundary. It is simultaneously a threshold, a border/limit, and an opening between the interior and the exterior. The liminal world that exists because of the window, between the interior and exterior, the space/not-space, exists through lights, reflections and shadows. For this reason, it is often momentarily unique and ever-changing. The appearance of this liminal world is dependent upon certain conditions inside such as, lighting, and conditions outside, including, the weather, time of day or time of year. The time-consuming process of capturing and painting the appearance of the momentarily unique wavering between two worlds is almost a contradictory process itself.

My paintings explore the notion of containing the temporary and solidifying the fluid and transient. Shadows and reflections become the focal point of many of my compositions. I work with the materiality of the paint, using thin washes over solid flat blocks of colour. I scratch into and remove layers of paint and medium to reveal fragments of a painting beneath. I work on reclaimed wood when I wish to heighten this effect. The marks and scratches on the surface indicate another history of the painting as an object. These layers interact with each other and reveal how separate worlds can meet to create a new space.

Instead of turning toward the source of the shadow to gain knowledge and understanding, as the allegory of Plato’s Cave proposes, in my paintings the forms inspired by the shadows and reflections themselves create knowledge and understanding. Their contours reveal the interaction between the light of the exterior on the confines of the interior space, illuminating a new, liminal world.

Flowing and Freezing, mirror a...

View from the Painter’s Stud...

The Banquet in Cyrus' Garden I...

The Banquet in Cyrus' Garden I...