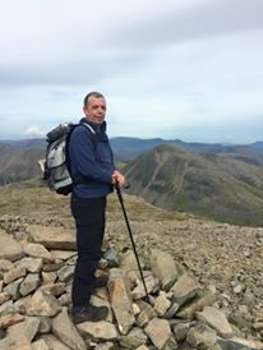 Imagine L.S Lowry were to partake in peyote? Or to immerse himself in an ayahuasca retreat in the North of England? Then perhaps the resulting work would resemble Martin Whittam’s with all its vivid and tiny details. A man walks a dog in the distance, a skyline is marred by smoke, a harbour freckled with boats – like Lowry before him, Whittam has really lived his subjects. Perhaps the most delightful aspect of Whittam’s work is his expressive, non realistic choice of intense colour.

Unsurprisingly his work has been commissioned worldwide as he possesses  the unique talent of creating work that is contemporary whilst maintaining a nascent charm...

Martin was born in Radcliffe, Lancashire, England, in 1961. After studying Fine Art at Liverpool Art School he pursued a career in education, teaching for thirty three years  in inner city Manchester ,working for  The Bahamas Ministry of Education and eventually becoming the Head of Art and Design at an independent Grammar School in Cheshire. He has now retired from teaching and paints full time. Martin's fascination for exploring every aspect of watercolour and acrylic painting, his skills of draughtsmanship, precision, accuracy, detail and unique, quirky style combined with his deep affection for the North West of England, have resulted in his paintings being commissioned and purchased for private collections in this country and abroad.His work hangs in private collections across the world including The UK,Jersey, Australia, New Zealand, USA,Hawaii, Canada, Mexico,South Korea, Norway, Sweden, Israel, France, Spain, Germany, Greece, Switzerland , Iceland, Malta, Thailand, U.A.E., Singapore and Ireland.

Going to the Match