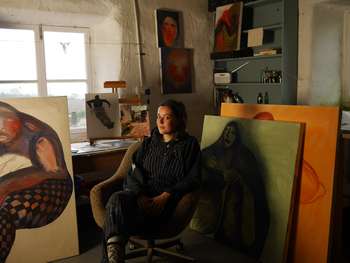 A sublime interaction of anatomy, connotation, and colour, flourishes to life in the dreamlike canvases of Manon Fleur Dowse. With works that appear to delineate an achingly tender soul, the viewer can expect a blossoming of creatures and conversations. Upon her journey to capture the fragility of humankind, Dowse’s style appears to have been influenced heavily by Paul Gauguin; and their technique seems to share a simply wonderful kinship.

A particularly striking feature of Dowse’s works are the colours with which she captures her subject: reds, browns, olives, and charcoals. The decision to keep her pallet natural perhaps has its roots in the theme of her work: the human soul. Dowse’s soft and orbicular paintings offer up a commentary of the human-psyche, seeking to illuminate emotional states of being such as: loss, affection, attachment, and absence. A natural palette for a natural state of being.

These paintings enquire into the polemics of human relationships. Centred on the figures itself they intend to stretch into the beyond of human emotions such as, Love and Hate, Honesty and Deceit, Desire and Indifference. The distortion and reconfiguration of the bodily form ignites a sense of monstrosity alongside the familiar, perhaps even friendly, creating a poetical drama for the expression of feelings and ideas. The exposure of such vulnerabilities in these works are in many ways articulating an internal faculty, which ultimately drives the paint to canvas. These works are intuitive explorations that manifest and emerge from my visual sensibilities, and in doing so I seek to create highly personal visualisations that elicit meaning capable of profoundly touching and resonating with the viewer.

Memories of a Soporific Mind