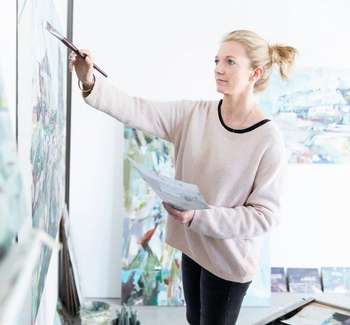 Avoiding picture postcard moments where possible, Katharine is drawn to structures, often abandoned and decaying, depicting how they inhabit the landscape around them. Working from memory and photographic references, the process of applying layers of paint, scraping back, obliteration, allows the painting to take its own fluid course giving it a life of its own. Although firmly rooted in representation Katharine’s work embodies an abstract drama which points beyond visual representation and towards the essence of her subject matter.

Since Spring 2018 I have been documenting the regeneration of the Wimbledon Greyhound Stadium. The Wimbledon dogs was the last remaining track in Greater London to still be hosting regular meetings until it was closed late last year. I have made weekly visits to the site to photograph and document the progress being made as the stadium is demolished and the site is slowly being prepared for the next phase of its development as it becomes the new home for AFC Wimbledon. Watching large sections of the stadium being dismantled and taking on new forms as each layer of the building is stripped back to its bare bones has given me a whole different perspective on the scale and historical significance of this place. After 90 years, and thousands of memories, it feels poignant to record this final chapter. The vulnerability of a building reduced down to its naked shell has allowed me to capture moments which really highlight the passage of time and has provided me with a wealth of imagery from which to work from.