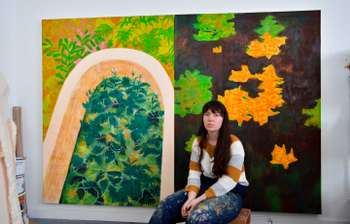 Julie-Ann is making a significant impression on the emerging art world. Shortly after graduating in 2015, she won The RSA Guthrie Award and Medal for an outstanding painting by a Scottish artist under 35. She has exhibited regularly since then - being shortlisted for a number of competitions and awards.

Julie Ann Simpson is an artist inspired by the senses, evoking harmonic rhythm, recent memory, absence surrounded by presence, the abstracted forms act as a series of random echoes, with the resultant canvases blurring the mark between a reminiscent dream or the experienced actuality.

My work attempts to convey this sensory experience through a synthesis of materials. I often make reference to natural forms or motifs within the environment I am depicting. Colour and pattern are then carefully considered and employed to create an abstraction of this experience; a fleeting memory, an idiosyncratic response. Within my work I aim to take an inner perception and give it physical form, thus bringing a tangible encounter to these imagined places. Constant in my work is the flux between the graphic and the atmospheric, creating within the picture plane a new place wherein the experienced reality and the romanticised perception can coexist.

Until the World Falls Away

The Brightness of Things

The Moon Sleeps in the Pool

A Space in the Shadows

The Comets Have Such a Space t...

She Sailed Far and Wide

In the Forests of the Night

The Sadness of Roses

I Can't Find You

The Sound of Water

Repair it with Gold

Lure to the Lost

In the Long Grass