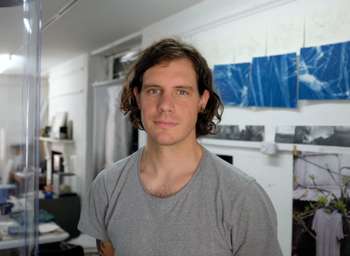 This artist captures the most spellbinding moments in time; looking out across the Atlantic Ocean from the cliff tops of Cornwall’s West Coast, the summer sun dances across its surface ripples and waves. The famous light of St Ives has inspired many artists in this area and has been the cause and effect of many great modern artworks. It is not hard to envisage that this marvellous spectacle was where Jonathan Michael Ray acquired the inspiration for his strikingly angular, and precisely executed rich blue cyanotype series, Synthetic Blue.

Jonathan’s practiced hand and intelligent eye have travelled from London to Montreal, to Hong Kong and Japan, and now to Cornwall and all of these new encounters, with life on the road, manifest in his work. Each of his pieces are an exploration of time and place, an experience of a moment, a dalliance with our human senses and sensibilities. The artist does not limit himself to a 2-dimensional surface, but continues to consider the space around the work, gifting the beholder with a simulation-like experience, and expanding the joy of seeing. Take for example, Perforated, an urban botanical scene in which we can see how Jonathan has considered the lens through which he wants his audience to experience the work. This technique has previously proven to be the mark of masterful and discerning artists such as Elad Lassry, Haim Steinbach and Anselm Keifer.

The most simply enchanting quality to Jonathan’s work, is that his artwork has the power to transport you. You could be wherever; in an office; at home; in a shipping container, but one glance at his Altar Stone sculptures and you are delivered to the absolute tranquillity of a deserted Victorian churchyard, or more precisely the “personal discovery of a lost shrine to a forgotten ancestor”. Jonathan’s skill is that he is an explorer who will tempt you to accompany him on his meditative journeys.

If you go anywhere this year, go wherever the astonishing artwork of Jonathan Michael Ray takes you.

In Aldous Huxley’s essay “The Doors of Perception”, he becomes fixated on the creases in his trousers, “those folds in the trousers - what a labyrinth of endlessly significant complexity!”

And in the short story by Jorges Luis Borges “The Aleph”, at the moment the protagonist carefully focuses on a single point in space he can see all things, in all time, from every angle, all at once.

I like to take the time to look at everything equally, and indeed more so at the things that don’t seem to deserve our attention. It in these moments I discover and create meaningful connections.

I see all objects, environments and places as imbued with memory and time, but I’m especially drawn to those which seem to have lost their exact meaning, either because they are no longer able to communicate it or we are simply no longer able to read it.

I’m drawn towards landscapes, spaces and objects of lost memory or that appear to have had their meaning fragmented, and through my work I create my own narrative or understanding of them, linking together or bringing to the forefront what I deem essential or wish to convey.

Sometimes it is important to point towards the fragment itself, and sometimes the process to which is has become lost; bricks washed up along the banks of the Thames, an overgrown garden, names scratched into a cliff face, a wall in disrepair, a smashed phone screen, an orphaned playing card, plastic bags caught up in the branches of a tree, the inability to remember everything I have ever seen.

Botanical illustrations are always of the perfect specimen, but I’m more interested in the imperfect. The imperfect better represents the world around us, a world of the “unbeautiful,” which (when you begin to focus) is, in fact, just as beautiful and fascinating than anything else.

2019, Bury Me With It, Newlyn Art Gallery, Penzance, UK
2018, There is nothing whatever do not look like what it was since I can remember, Porthmeor Studios, St Ives, UK
2017, Beneath and Between, White Crypt Gallery, London, UK
2013, Le Studio Show, Galerie Bifurski, Montréal, Canada