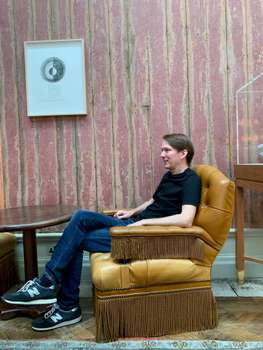 Bollen cites his litany of imagined collaborations ranging from the traditional Japanese school painter, Ogata Korin, to influential American film director Stanley Kubrick. Both of these artists can be seen reflected in Bollen’s work; from the impactful colours he chooses to capture – similar to the floral palette used by Korin – to the philosophy his work seems to emote, so closely mirrored by that of Kubrick who was once quoted as saying: ‘The essence of a dramatic form is to let an idea come over people without it being plainly stated. When you say something directly, it is simply not as potent as it is when you allow people to discover it for themselves…’ This dialogue seems particularly potent when considering a piece of Bollen’s work; his photographs do not immediately render all their secrets, instead, they wait for you to uncover their many layers…

My work centres on real and imagined collaborations with other artists. These artists include the Japanese Rinpa School painter Ogata Korin, the surrealists Giorgio De Chirico and Paul Delvaux, the writer JG Ballard, and directors David Lynch and Stanley Kubrick. Their aesthetic sense, and how I relate this to architecture, design and colour, informs my choice of subjects and the locations I photograph.

My portraits of women are taken for See You, a sporadic magazine inspired by DIY fashion photography, where each issue is set in a different city. Each woman brings their own artistic sense, actively collaborating in the making of their images.