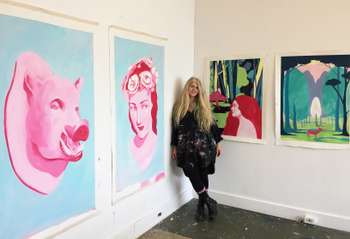 Heather Gentleman’s work is narrative in nature, finding inspiration in literature, anthropology, mythology, and symbolism. She approaches her work primarily through painting and sculpture, but also works in drawing, video, writing, interactive installation, audio and performance. She chooses to layer media when it enhances the telling of the story by allowing the viewer a fuller comprehension of the layers of meaning in the work. Imbued with psychological undertones and observation of contemporary culture in a historical context, she explores how ideas, themes and social mores recur and are paralleled from one time period to another and how our understanding of the past is shaped by our own contemporary viewpoint. Characters peer out at the viewer as strangers that belong to a separate, surreal world, telling stories with the sensibility of an intimate conversation, expressing universal motifs that bridge with the personal. Her landscapes could be derivative of Italian Renaissance painting with floating putti or a camp science fiction film. The compositions are often of a centred figure or object that creates a natural mirroring with the viewer which enhances the idea of dialogue, enabling the viewer to see him/herself in the story. Her large scale paintings, by sheer scale, are installations in themselves, engaging the viewer to step into the experience. Their totem like structures have a theatrical feel that embody the physical and deal with the conscious and unconscious, the body and architecture, and space and memory.

My Tears Filled the Well

I Wove New Events into Being

I Wandered the Wastelands

My Names are Endless

I spoke to all who were lost