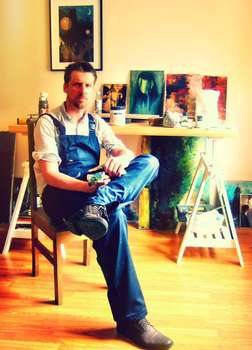 Not unlike early cubism, David McConochie experiments with form through dramatic fragmentation -  his images of landscapes are arranged into grid-like, geometric structures, created through collage. McConochie’s technique involves painting, or drawing, a landscape and subsequently cutting it up and rearranging it into a new composition. The resulting imagery plays with the traditional representation of landscape as subject matter, subverting it to instead focus on imagined structural forms and interpenetrating planes. Similarly, effective, is McConochie’s use of colourful, bold hues to represent the landscape. McConochie’s stylistic approach creates labyrinths of intricacies, infusing his imagery with an oxymoronic sense of control and, simultaneously, chaos. This conflicting aspect of the work, is the visualisation of what McCononchie sees as the fundamental characteristic of the world he is representing.

I'm an award winning artist and illustrator originally from County Durham in the North East of England. Since coming to London in 2004 to complete an MA in Illustration at Central Saint Martins, I've been working freelance from my studio in East London. My work has been applied across various printed media, from book covers to a limited edition postage stamp for the Royal Mail. I recently won several Awards for my work on the Folio Book of Ghost Stories including being named as Moira Gemmill Illustrator of the Year at the V&A Illustration Awards. Over the past year I have been focusing more on personal work with a particular interest landscape and memory. My work is expressionistic in it's approach using a combination of collage, painting and digital techniques in an intuitive manner. in this respect colour and texture are central to my work due to their ability to create specific mood and tone, Something I'm inspired by (particularly with my nature and landscape based imagery) is the balance between the chaotic, uncontrolled and ambiguous elements of the world around us and on the other side repetition, pattern, order and observation. Ambiguity is something I try to embrace into all aspects of my imagery rather than remove as its a key part of the way we see and digest the world. Creating artwork for me is a process of dissection and re-assemblage;. With my mixed media and collage work this manifests quite literally where I will often take painting and sketches and take them to pieces, cut them up and re-order them until they have a new life. Often, If they are successful I like to think of them as a concentrated version of the subject matter but also somehow removed from it.

Mid the Groves/Sketches from t...

Lines to the Sea