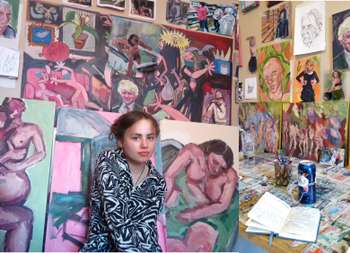 For the past three years, my work has largely drawn upon the male gaze and the concept of voyeurism. In referencing canonical genres in the histories of western modernity, such as the bather and reclining nude, my paintings converse with their predecessors to subvert, interrogate and reclaim ramifications in the way the sexes have been represented.

The popular narrative, Susanna and the Elders, is of important reference to the bathing nude and its allegorical connotations of female virtue. Western paintings that often control the exposure of Susanna’s body, in the voyeuristic conspiracy of the Elder’s gaze, subjects her body as an object of masculine desires. The self-portrait enables me to reclaim the way the female body and experiences have been subdued by canonical patriarchal cultures.

The domestic mundane forms the locus of my subject matter, and is manifested into representing a visceral venue of security, intimacy, vulnerability, sexuality and identity. My works registers the bedroom and bathroom as a space of both comfort and exposure complying with traditional spaces of modernity whereby the feminine construct has often been placed, and my own personal experiences. The viewers gaze is then mocked, ignored, welcomed but ultimately acknowledged in my representation of my personal experiences.

2019, My Gaze slaps the side of your face, Gender neutral toilets, Leeds