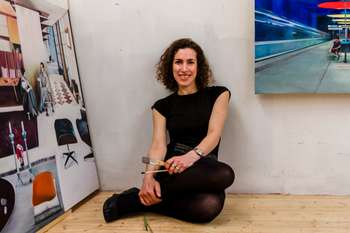 Through the process of painting I make my own interpretation of iconic architecture and its associated lifestyle. The fashionable scenes that I paint are populated but focus on the non-communication or separation of each figure from the other - which infers an emotional absence. My iconic frozen-in-time scenes allow a human presence, but the characters are speechless and isolated. The work thus shows an interest in the relationship between the figures and the architectural spaces that surround them.

My paintings also pay homage to the greatest design classics of the twentieth century. I start by choosing an image from an array of magazines and books (some of which are from as far back as 1939). Then the image is faithfully transcribed into hyperreal paintings. Futuristic design, iconic architectural form, a bridge connecting two cities in two countries: these things are exciting as they create a platform for new experiences. I want to capture a designed object's unique beauty and strength. A new series of canvases are inspired by the 1970s design store Artemide (my source material is old 70s design magazines found at flea markets) and the contemporary design store Illums Bolighus in Copenhagen.

I am also a curator with experience curating at ArtKapsule, Arthouse1 Gallery, APT Gallery, Cambridge University, Tripp Gallery and Stour Space. I have exhibited (and am in art collections) all over the world, from Cork Street in London to Tasmania, Australia. In 2017 I was selected for the final round of judging at the Royal Academy Summer Exhibition. Shows include John Moores Painting Prize, British School at Rome, NatWest Art Prize, Kettles Yard, Art Basel, University of Cambridge, Tripp Gallery and Arthouse1 Gallery, Bermondsey, London.

Charles and Ray Eames at Home ...

A Testament to Life

Poul Henningsen in the Demonst...